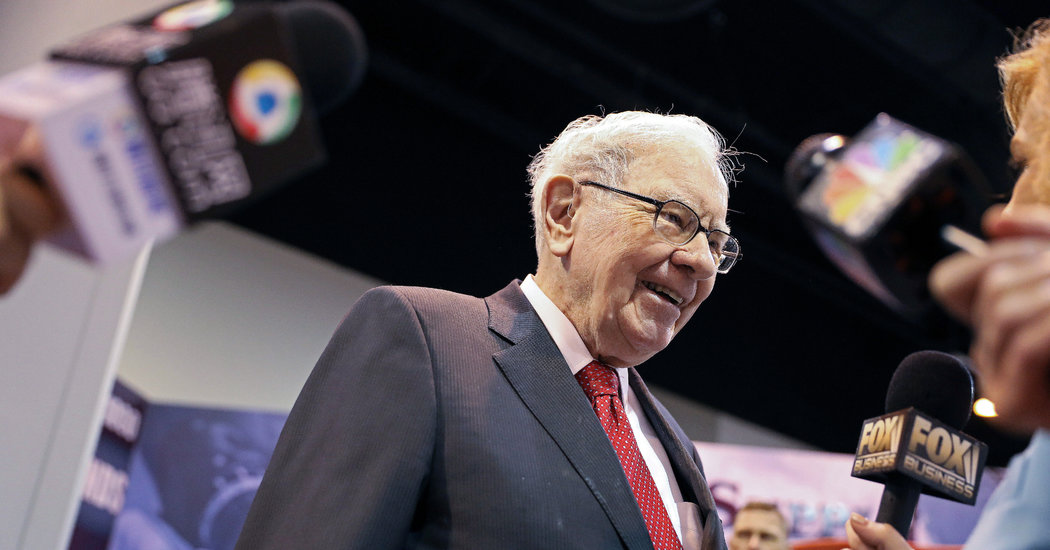 Get the DealBook newsletter to make sense of major business and policy headlines — and the power-brokers who shape them.
__________

Stock investors have had little love for banks over the past year. With one notable exception.

Warren E. Buffett’s Berkshire Hathaway has been building its position in banks over the past year. It is now among the five biggest shareholders in Bank of America, JPMorgan Chase, Wells Fargo, Goldman Sachs, U.S. Bancorp and Bank of New York and owns big stakes in others. Its latest disclosure of its holdings showed that the firm had added to its positions in some of those companies in the second quarter.

Bank stocks fare better when the economy is growing strongly, companies and individuals are taking out more loans, and interest rates are high.

Right now, investors are thinking the exact opposite: Economic growth is slowing, worries of a recession are rising, the Federal Reserve just cut interest rates for the first time in more than a decade and investors expect more cuts to come. Wall Street analysts expect those lower rates to crimp the profitability of banks over the next year.

So, naturally, bank stocks are falling. The KBW Bank Index, which is made up of 24 of the leading national and regional banks, is down about 17 percent in the past 12 months. In the same period, the S&P 500 is essentially unchanged.

“Nobody is willing to buy them,” Savita Subramanian, head of United States equity and quantitative strategy for Bank of America Merrill Lynch, said of bank stocks. “They are still treated as the toxic, levered housing play they were in 2007.”

Why could that change?

Much, of course, will depend on whether the United States economy does tip into a recession soon. If that happens, shares of banks, along with most stocks, won’t find too many buyers.

But there’s a case to be made that fears of a recession in the United States are overblown. American consumers, a big engine of the economy, are still holding up — with unemployment low, the job market still growing and inflation nowhere to be seen.

If the economy keeps growing, bank stocks could look appealing. The financial sector’s price-to-earnings ratio, a yardstick that compares stock prices with the expected future earnings, is near its lows of the past five years and easily the lowest of any of the S&P 500’s 11 sectors.

And banks are much healthier than they were during the financial crisis more than a decade ago. Today, bank capital, the main financial defense against losses, is high, and profit growth continues. In the second quarter, bank profits grew 9 percent, among the strongest performances of the industry groups in the S&P 500.

Then there’s the factor that Mr. Buffett cites in explaining his interest in banks: They’ve been giving back more money to shareholders.

For the 12 months that ended on June 30, JPMorgan Chase, Wells Fargo, Bank of America, Goldman Sachs, Morgan Stanley and Citigroup handed back about $135 billion to shareholders through dividends and repurchases of their own stock. The financial sector’s total yield, which includes both dividends and buybacks, stood at more than 7 percent at the end of the first quarter, the highest of any other sector in the S&P 500.

Mr. Buffett has long been attracted to companies that pay high dividends, and in recent years has expressed enthusiasm for the share repurchases by the companies in which his firm invests. He wrote in his 2016 annual letter to Berkshire’s shareholders: “Many of our investees, including Bank of America, have been repurchasing shares, some quite aggressively. We very much like this behavior because we believe the repurchased shares have in most cases been underpriced. (Undervaluation, after all, is why we own these positions.) When a company grows and outstanding shares shrink, good things happen for shareholders.”

Bank stocks rose that year and through 2017. But the KBW Bank index ended trading on Friday pretty much unchanged from where it stood at the end of 2016. And it’s not clear what will spur investors to follow Mr. Buffett’s lead on this sector.

Bank stocks have been “cheap for a long while, and I have been trying to find the catalysts,“ said Audrey Kaplan, the head of global equity strategy at the Wells Fargo Investment Institute.

“If we are in a low-return environment — let’s say just 2 percent to 3 percent return over the next 12 months — and you have a sector paying more than a 6 percent total yield, it makes the sector very attractive,” she said.