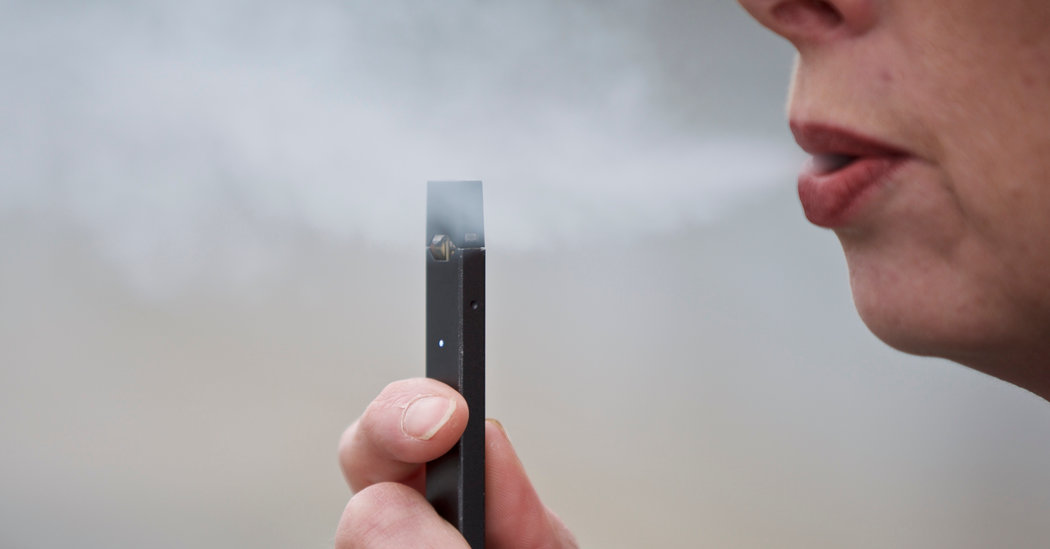 As health concerns mount over the rise in teenage vaping, CNN, CBS and Viacom are ending advertisements by e-cigarette companies.

The parent company of CNN, WarnerMedia, said on Wednesday that it was removing the ads from its entire portfolio of networks, including TNT and TBS, in response to recent health warnings from authorities including the American Lung Association and the Centers for Disease Control and Prevention.

“We will continue to monitor the investigations by relevant medical agencies and may re-evaluate our position as new facts come to light,” Jennifer Toner, a company spokeswoman, said in a statement.

A spokesman for CBS said Wednesday the network would also no longer accept the advertisements. Viacom — which owns the MTV, Nickelodeon and BET networks — took the same stance.

Juul, the most popular e-cigarette company in the United States, did not respond to a request for comment on Wednesday evening. Last week, after the Trump administration said it would ban the sale of most flavored e-cigarettes, Juul said it strongly agreed “with the need for aggressive category-wide action on flavored products.”

The decision by several major networks to pull the ads, reported earlier by CNBC, reflected the way parents, doctors and government officials are increasingly treating e-cigarettes as addictive, potentially dangerous products rather than smoking-cessation devices. Under federal law, tobacco companies have been barred from advertising on television and radio since 1971.

In recent months, mysterious vaping-related illnesses have been on the rise. Medical authorities have documented nearly 400 cases of vaping-related sicknesses in nearly three dozen states. A seventh death linked to vaping was reported in California this week.

Investigations are underway by the C.D.C., the Food and Drug Administration and state health departments. Federal officials said Wednesday that teenage vaping use continued to jump this year, suggesting that campaigns to curb e-cigarette use among minors were not working.

On Sunday, Gov. Andrew M. Cuomo of New York announced emergency regulations to quickly ban the sale of flavored e-cigarettes, and state health officials approved the ban on Tuesday. Michigan announced this month that it would also prohibit such products.

The e-cigarette industry has spent $57 million on TV ads this year. Juul has spent the most, followed by brands like Vuse, Blu Cigs and Freeboxmod.com, according to iSpot.tv, a company that tracks commercials.

As of this week, Juul had spent more than $30 million on TV commercials, with almost 9,100 national ad airings, according to iSpot.tv.

CBS was the biggest recipient of those dollars, getting $5.1 million for placements on shows like “The Big Bang Theory” and “Blue Bloods.” WarnerMedia properties accounted for $4.6 million of Juul’s ad spending, with airings across CNN, TBS, TNT and HLN.

On Wednesday, the National Institute on Drug Abuse released survey results that underscored the growing popularity of e-cigarettes among teenagers: Since 2017, the prevalence of vaping in the eighth, 10th and 12th grades has more than doubled, researchers at the University of Michigan found.

In the survey, one in 11 eighth graders, one in five 10th graders and one in four 12th graders reported vaping within the previous 30 days. Twelve percent of 12th graders said they had vaped at least 20 times during that period.

“Current efforts by the vaping industry, government agencies and schools have thus far proved insufficient to stop the rapid spread of nicotine vaping among adolescents,” the researchers said.