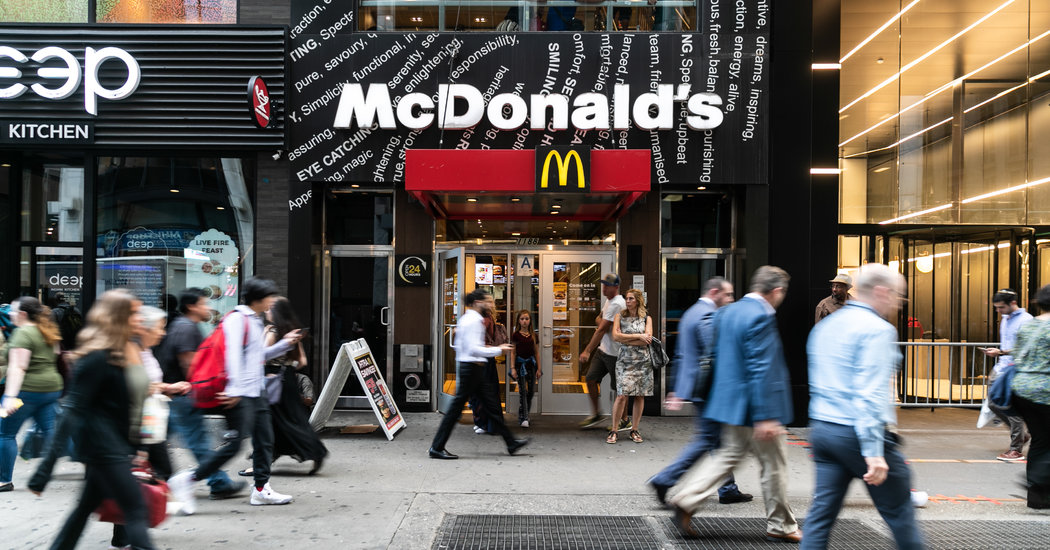 A former McDonald’s employee who says she was assaulted by a manager at a Michigan store who grabbed her breasts and buttocks is suing the chain, blaming her mistreatment on what she called a culture of sexual harassment.

The suit, filed on Tuesday, comes as hundreds of McDonald’s employees in Michigan are planning to go on strike to protest the company’s handling of such allegations and demand a labor union. And it increases the scrutiny of McDonald’s a little over a week after its chief executive, Steve Easterbrook, was fired for having a relationship with a subordinate.

In the complaint filed in state court, Jenna Ries said she was repeatedly harassed by a manager at a McDonald’s in Mason, Mich., between 2017 and 2019. Ms. Ries also said the manager put his penis in her hand while he was working next to her in the kitchen. The manager threatened to fire Ms. Ries for rejecting his sexual advances, the complaint said, and also harassed “many other women and girls.”

The store is owned by a McDonald’s franchisee, but the suit, just the latest of dozens of sexual harassment complaints filed by McDonald’s employees in recent years, argued that the problem lies with the chain itself.

The lawsuit by Ms. Ries names Chicago-based McDonald’s, as well as the franchise owner, Michael Dickerson. It is seeking class-action status and $5 million in damages to compensate employees at the McDonald’s in Mason. The manager accused of abuse isn’t identified in the filing.

In a statement responding to the lawsuit, McDonald’s said that it is working with franchisees to create “safe and respectful” workplaces.

“There is a deeply important conversation around safe and respectful workplaces in communities throughout the U.S. and around the world, and McDonald’s is demonstrating its continued commitment to this issue,” the statement said.

Mr. Dickerson, the franchise owner, could not immediately be reached for comment.

Last fall, McDonald’s workers in 10 cities went on strike to draw attention to the sexual harassment they face and demanded that the chain do more about the problem. And in May, the Time’s Up Legal Defense Fund, the American Civil Liberties Union and the labor group Fight for $15 announced the filing of nearly two dozen harassment complaints against McDonald’s, most of them sent to the Equal Employment Opportunity Commission.

Over the last week, the chain has come under renewed scrutiny, after the McDonald’s board fired Mr. Easterbrook for exercising “poor judgment” in a consensual relationship with an employee.

In the #MeToo era, rules banning managers from dating their subordinates have become more and more common, as companies recognize the inherent power imbalances in such relationships and look to protect themselves from bad publicity and legal ramifications. Some experts speculated that McDonald’s fired Mr. Easterbrook to show its commitment to cracking down on problematic behavior at all levels of the company.

Much of that abuse, workers have alleged, has taken place at the franchise level. McDonald’s has thousands of locations in North America, most of them independently owned, and has long argued that it should not be held liable for the behavior of employees at franchisees’ stores. In a major victory for the chain, a federal appeals court ruled in October that McDonald’s was not a “joint employer” of its franchisee staff.

Still, McDonald’s recently began offering new online and in-person training programs to its employees in the United States to combat workplace sexual harassment. And it has established a hotline for employee complaints and clarified its policies on harassment. Those steps have not satisfied its critics, though, who are demanding that the chain’s upper management sit down with workers to discuss the issue.

“McDonald’s likes to say that it is powerless to stop the sexual harassment occurring in its franchise restaurants,” Gillian Thomas, a senior staff attorney with the ACLU Women’s Rights Project, said in a statement on Tuesday. “That would be laughable if it weren’t so destructive to the lives of tens of thousands of workers being left to fend for themselves.”