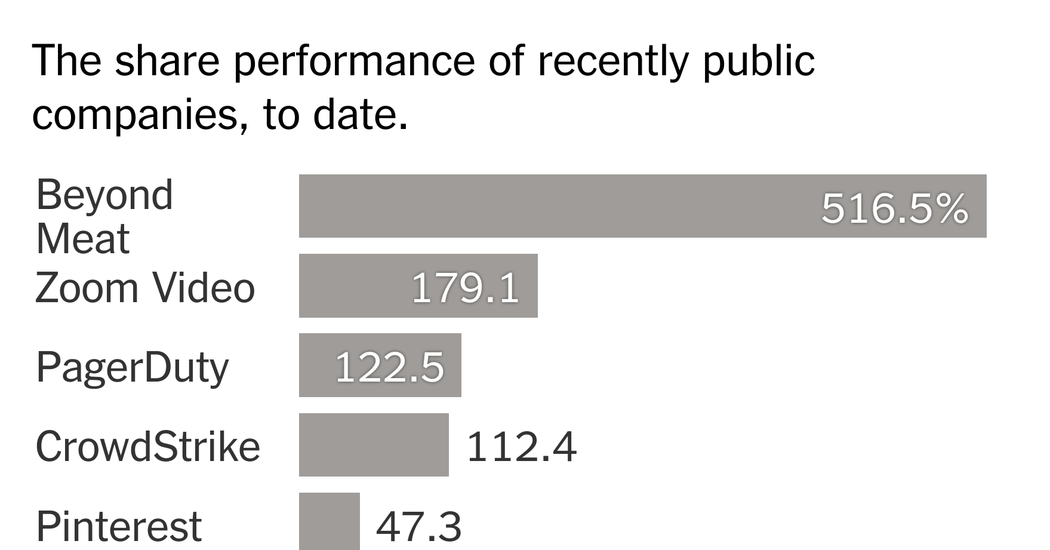 Uber and Lyft were the largest and most anticipated of the parade of highly valued tech companies to have gone public this year. They were also the biggest flops.

Their struggles cast a shadow over the market and raised further questions about investors’ appetite for the offerings of the so-called unicorns who had yet to go public.

But take a closer look at the tech start-ups to hit the public markets this year, and it quickly becomes apparent that the struggles of Uber and Lyft have much more to do with their financial performance and less to do with the market. Investors’ demand to own a piece of fast-growing young technology firms remains robust, and nearly halfway through the year, 2019 is shaping up to be among the strongest years for tech companies to go public.

So far, 25 tech companies have raised $19 billion through initial public offerings on United States exchanges, according to the data provider Dealogic. Over all, those stocks have gained 34 percent on their first day of trading, the best performance since 2013, and, on average are up 30 percent.

On Thursday, Slack became the latest unicorn to see its shares soar on their first day of trading. The messaging and workplace collaboration company eschewed the more common I.P.O. process and went public through a direct listing, in which a company does not issue new shares or raise additional capital. Its stock rose about 50 percent from a reference price of $26.

Slack’s debut came just a week after CrowdStrike, a cybersecurity firm; Chewy, an online pet-supply retailer; and Fiverr International, a freelance-services marketplace, all went public and gained more than 50 percent on their first day of trading.

After years of waiting, stock market investors finally have an opportunity to own shares of Silicon Valley’s most valuable companies. The start-ups that have also made their public market debuts this year include Pinterest, Zoom Video, Beyond Meat and PagerDuty. Airbnb, WeWork, Palantir, The RealReal, and the food-delivery service Postmates are expected to follow later this year or early next year.

Despite all the hype and excitement, questions have hung over these I.P.O.s: What would the appetite be among investors? Many of the start-ups gaining multibillion dollar valuations are feasting on the buffet of easy money in the private markets from venture capitalists, hedge funds and sovereign wealth funds. But a number also are deeply unprofitable, and in some cases, their growth was slowing.

The struggles of Uber and Lyft only added to the doubts. Shares of both companies are trading below their I.P.O. price. At their lows, the two firms had shed about $25 billion in market value.

But they operate in a new industry, ride-hailing, which offers investors no direct public company comparisons. And both were racking up huge losses with no clear path to profitability.

The performance of their shares since going public has demonstrated there are limits to how much cash burn investors will tolerate, said Barrett Daniels, a partner at Deloitte who is focused on I.P.O.s. “I used to think it was only about growth,” he said. But investors want to see revenue growth along with a “reasonable” path to turning a profit, he added. “It’s nice to be able to see the trajectory yourself and generally understand that it is believable,” he said.

Atish Davda, chief executive of EquityZen, a marketplace for private stocks, said public market investors were rewarding companies like Slack, whose losses are shrinking as a percentage of revenue. “That shows that eventually it’ll go from red to black and continue to grow,” Mr. Davda said. Uber and Lyft’s net loss margins are shrinking at a much slower clip than other tech firms’, he said.