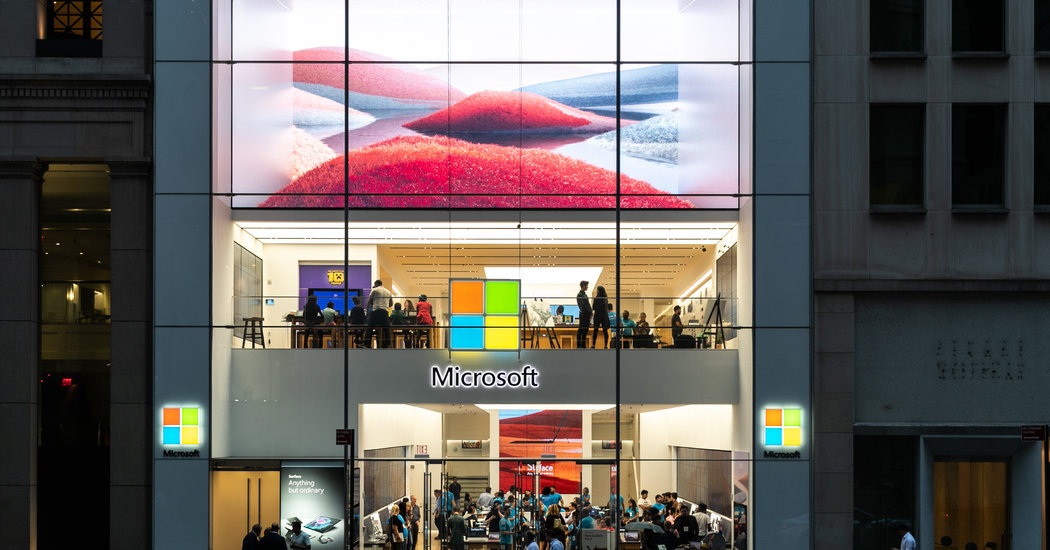 Good morning. Published in today’s newspaper is a special section dedicated to last week’s DealBook conference. Subscribers to this email got the lowdown last Thursday, but check out the write-ups of our special task force meetings that took place on the day — about growing fervor for regulating Big Tech (moderated by Kara Swisher), how best for the U.S. to engage with China (moderated by Thomas Friedman), and the need for leadership to reduce gun violence (moderated by David Gelles). (Was this email forwarded to you? Sign up here.)

Ranking U.S. companies by the priorities of Americans

Just Capital and Forbes have rated U.S. firms based on factors that matter most to the American public, like fair pay, ethical leadership, customer privacy, environmental impact and job creation.

Here are the top 10 most just U.S. companies according to their analysis:

Microsoft’s top spot is a result of its “particularly strong track record on how it serves its workers, communities, and the environment,” according to Just Capital.

Compared with averages for the Russell 1000, the 100 companies in the listing pay their median workers 31 percent more, give 8.4 times as much to charitable causes, have 25 percent more women on their board, and are 32 percent more likely to have established environmental policies. They also score a higher return on equity, by six percentage points.

It would be the biggest private equity transaction on record. Walgreens Boots has a market value of about $56 billion and $16.8 billion of debt. At that size, a successful take-private transaction would top the $45 billion buyout of the utility TXU in 2007, according to data compiled by Bloomberg.

But “it’s unclear how feasible the transaction would be,” Bloomberg reports, because of the financing required. “It’s a huge stretch doing things over $50 billion,” Stephen Schwarzman, head of the Blackstone Group, said at a conference last week.

A buyout would test the appetite of bond investors, “where a tide of cash has sent borrowing costs lower but investors have worried about risky deals,” the FT reports.

Still, investors liked the news, and sent Walgreens Boots shares 5 percent higher by the close of the market.

Uber’s C.E.O., Dara Khosrowshahi, is facing a backlash after calling the murder of Jamal Khashoggi a “mistake” by the Saudi government and comparing the killing to the accidental death of a woman hit by a self-driving car. He’s walked his comments back, but they highlight the difficult situation that Saudi money puts the company in.

“It’s a serious mistake,” Mr. Khosrowshahi said in the interview with Axios on HBO, after he was asked about the brutal killing last year by Saudi operatives of Mr. Khashoggi, a Saudi journalist. “We’ve made mistakes too, right, with self driving, and we stopped driving, and we’re recovering from that mistake. So I think that people make mistakes.”

• He backtracked first in a phone call and then in an emailed statement to Axios, before the interview aired.

• Then yesterday on Twitter he wrote: “I was wrong to call it a ‘mistake.’”

Saudi Arabia is Uber’s fifth-largest shareholder, and its board includes Yasir al-Rumayyan, the governor of Saudi Arabia’s Public Investment Fund who was recently named chairman of the state-owned oil giant Saudi Aramco.

“I am under no illusions that Silicon Valley will stop taking ever-dirtier Saudi money,” the tech columnist Kara Swisher wrote last week in an NYT Op-Ed. “But tossing Mr. al-Rumayyan off the board would go a long way in acknowledging the problem.”

Would John Legere even want to run WeWork?

WeWork is in talks with John Legere of T-Mobile as a potential C.E.O., Peter Eavis of the NYT writes, citing unnamed sources.

Adam Neumann, the co-founder of the struggling real estate company, stepped down from the role in September amid controversy over the company’s business model and corporate governance and the calling off of its I.P.O. He was replaced by two executives, Sebastian Gunningham and Artie Minson. WeWork was bailed out of a cash crunch last month by its largest outside shareholder, SoftBank.

Mr. Legere is credited with reviving T-Mobile, which he has led since 2012. “He slashed prices, introduced new plans and heaped ridicule on rival cellphone companies,” Mr. Eavis writes. It paid off: T-Mobile has more than doubled its subscribers under Mr. Legere.

He is one of several candidates WeWork is considering, the sources said.

But significant conflicts of interest are embedded in these talks. “T-Mobile is seeking to merge with Sprint, which SoftBank controls,” Mr. Eavis writes. “Mr. Legere could have a difficult time separating T-Mobile’s negotiations with Sprint from his talks with WeWork.”

And any new C.E.O. would face a tough task. WeWork posted a $1.4 billion operating loss in the first half of the year, and it is not clear if and when any of its office spaces might become profitable.

Google yesterday announced a deal with Ascension, the country’s second-largest hospital system, to store and analyze the data of millions of patients, write Natasha Singer and Daisuke Wakabayashi in the NYT.

• Ascension operates 150 hospitals in 20 states and the District of Columbia.

• The data of all Ascension patients could eventually be uploaded to Google’s cloud computing platform.

“Already, the two organizations are testing software that allows medical providers to search a patient’s electronic health record by specific data categories and create graphs of the information, like blood test results over time,” Ms. Singer and Mr. Wakabayashi write.

Google’s big health plans include the use of artificial intelligence to read electronic health records and predict or identify medical conditions.

But it faces competition from other tech giants. Amazon, Apple and Microsoft are also seeking slices of the huge health care market.

And Google’s handling of health care data is a touchy subject, on which its A.I. subsidiary DeepMind has a checkered past. Some Ascension employees have raised concerns about Google access to patient data and about whether it complies with federal privacy laws.

Boeing’s vision for getting the 737 Max airborne

The airplane maker yesterday explained its plan for getting its 737 Max, which has been grounded since March following the fatal crashes, back into the air, the AP reports.

• Boeing hopes the F.A.A. will certify updates to the jet this quarter, which it says could allow it to start delivering the jets to customers again in December.

• But retraining pilots would take longer. Airlines would be unlikely to be flying the jets until January, if then.

Investors liked the news, and Boeing’s share price jumped by as much as 5 percent.

But “why the F.A.A. would be willing to throw Boeing a bone like this is less clear,” Brooke Sutherland of Bloomberg Opinion writes. And even if all goes to plan, Boeing faces the logistical complexity of delivering a huge backlog of airplanes, and the continued fallout of legal proceedings over the jets.

Just how tough is Europe on tech?

E.U. regulators are considered the world’s leading tech industry watchdogs. But those involved in the Continent’s antitrust battles tell American authorities that there is a lot to learn from Europe’s mistakes, writes Adam Satariano in the NYT.

Among the challenges that the E.U. faces:

• “Antitrust investigations in Europe have taken years to complete, in part because company lawyers use stalling techniques that give the tech giants added time to squeeze out rivals.”

• “The inquiries have centered on single aspects of the companies, like Google shopping, rather than their entire business.”

• “The penalties have focused on headline-grabbing fines rather than structural changes that would restore competitive balance.”

But tougher antitrust enforcement is necessary, the authorities in the U.S. and Europe have suggested in recent weeks, Mr. Satariano notes. Margrethe Vestager, the top antitrust regulator in the E.U., is pushing for new approaches, and Makan Delrahim, head of the antitrust division at the U.S. Justice Department, said remedies like breaking up the companies were “on the table.”

More: Germany has urged the E.U. to toughen its approach to Big Tech as part of a wider push to maintain competition.

Lionel Barber is stepping down as the editor of the FT after 14 years.

Andreas Utermann, the C.E.O. of Allianz Global Investors, is departing after three years in the role. His replacement will be Tobias Pross, a member of the asset manager’s global executive committee.

Robinhood’s vice president of product, Josh Elman, has left the company after less than two years at the company.

Vijay Karnani, the co-head of India for Goldman Sachs, is retiring from the bank after 21 years with the company.

• Travis Kalanick sold more than $500 million of Uber stock in the days immediately after the end of restrictions on early investors. (FT)

• Tata Group has approached carmakers including Geely of China and BMW seeking partnerships to cut costs at its Jaguar Land Rover brand. (Bloomberg)

• Occidental is reportedly trying to sell oil and gas properties in Wyoming and Colorado, that it acquired when it purchased Anadarko, for as much as $700 million. (Reuters)

• Anheuser-Busch InBev plans to buy the part of Craft Brew Alliance that it does not already own in a deal that values the company at about $321 million. (Reuters)

• Two digital media firms, The Athletic and Axios, are both seeking to raise funds. (Information)

• A top Pentagon official told investigators that the White House had asked about Ukraine’s security aid in mid-June, nearly a month before the funding was frozen. (NYT)

• How a 30-minute conversation with the president of Ukraine grew into a mortal threat to Mr. Trump’s presidency. (NYT)

• A Trump administration plan would limit the research the E.P.A. can use to justify clean air and water regulations, making them harder to enact. (NYT)

• President Trump is expected to speak at the Economic Club in New York today. Analysts will listen for comments on trade. (Bloomberg)

• Mr. Trump is widely expected to put a delay of several months on auto tariffs for Europe. (NYT)

• Microsoft said that it would honor California’s forthcoming privacy law throughout the U.S. (Reuters)

• SpaceX launched 60 satellites into space yesterday, as part of its planned constellation of tens of thousands of orbiting transmitters to beam internet service across the globe. (SpaceX)

• Black Facebook employees wrote an open letter to the company saying that they were regularly treated as if they “do not belong here.” (Root)

• Spinning off Tencent’s fintech business could unlock as much as $230 billion in value. (Bloomberg Opinion)

Best of the rest

• UBS has been fined around $51 million for overcharging wealthy clients for more than a decade. (WSJ)

• Nissan reported a 55 percent drop in quarterly profit and cut its earnings forecast as it struggles to move past management problems. (NYT)

• Protesters angered by the shooting of a demonstrator in Hong Kong fanned out across the financial hub on Tuesday, blocking transit and scuffling with the police. (NYT)

• After a three-year absence, the New York City restaurant guide Zagat is back in print. (NYT)

Thanks for reading! We’ll see you tomorrow.