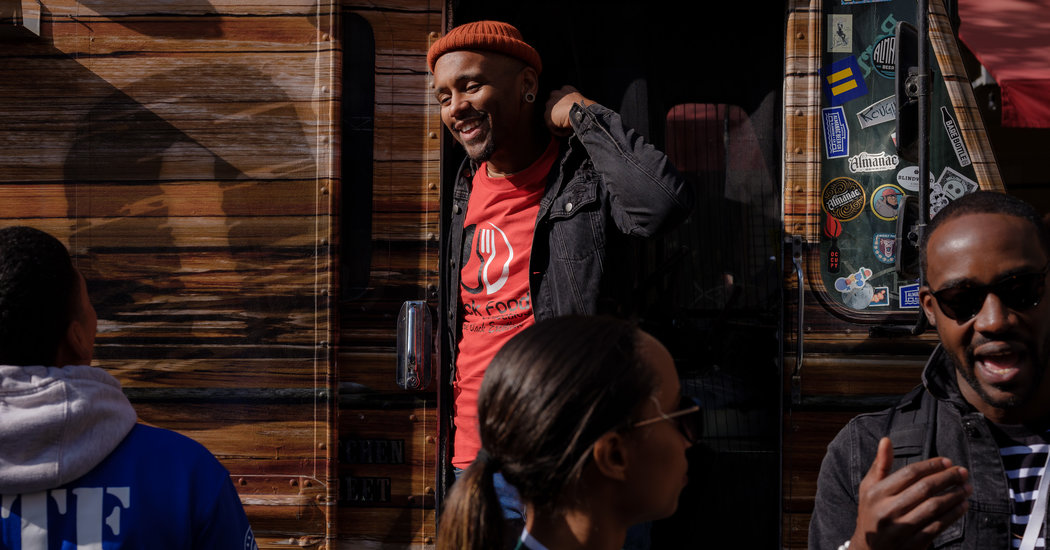 Food trucks, once a novelty, are now seemingly on every city street corner. Lately, they’ve even been showing up at hotels and business meetings as conference organizers aim to give a group an “authentic” experience and a taste of the local culinary scene.

“It’s intriguing to corporate planners who are thinking outside the box,” said Zoe Moore, a consultant in the San Francisco Bay Area who helps event organizers coordinate the logistics of using trucks, from vendor licenses to seating.

Ms. Moore said many of her clients were technology firms in the area. “Hotels and tech companies like the trend because it gives them a variety for their attendees and the food is cool, it’s hip,” she said.

Rashad Armstead, a chef, coordinates the logistics from the truck side through the Black Food Collective, a group he founded in Oakland, Calif. It is a consortium of food trucks that is used by event planners for large groups.

He works with food-truck operators on tailoring their menus for corporate clients. For a conference for black technology entrepreneurs last month, he created an outdoor area next to the Oakland Convention Center for 15 food trucks and tents, with added seating areas for the roughly 5,000 conferencegoers.

“The diner of this generation is different,” Mr. Armstead said. “We don’t want fancy food. We want good food.”

A food truck can also help a hotel circumvent space constraints, as in the case of the Gates Hotel Key West. The hotel bought and now operates its own truck, named the Blind Pig.

“Key West is a little restricted on space, and we were trying to get creative with the space we have,” said Lee Sheehan, the area director of sales and marketing for the hotel’s parent company, the Keys Collection.

The Gates, which does not have an on-site kitchen, also refurbished an Airstream trailer that functions as a prep and staging space. An adjacent sister hotel, 24 North Hotel, has a pool bar with a kitchen that can also be tapped for large catering orders.

Ms. Sheehan said hotel guests and event planners liked the novelty of the food truck. “We always get positive feedback,” she said.

According to Ross Resnick, the founder of the food truck booking site RoamingHunger.com, requests for trucks at conferences and conventions have risen 10 percent in the past year.

Some larger hotels have taken a different path to offering “food-truck food.” They have fake trucks.

“We made it into a really nice station that really looks like a food truck,” Mr. Meijers said. “You really have the idea that you’re actually going to a food truck.” The food, though, is cooked in the hotel’s kitchen and staged behind the “trucks” — the hotel has five of them — with staff serving diners from the “truck” windows.

The Grand Geneva Resort & Spa and Timber Ridge Lodge & Waterpark, sister properties in Wisconsin, share a fake food truck, a trailer called the Grand Grille. How they use it depends on the event, said Brad Lyles, director of sales and marketing for the two properties.

“You have the capabilities to cook it there, but if you have a couple hundred people, you have stock in the back,” he said. “You have to look at it from a business practicality standpoint. Where is it smart to use it?”

When the catering demands of a large group require brick-and-mortar kitchen preparation, proper staging is crucial to a successful illusion, Mr. Lyles said.

“When you’re doing a set group event, then you build a couple of things around it,” he said. “If you’re doing like a barbecue theme, you’re grilling the ribs close by, you’re building the side amenities around it.”

Some event planners say that what the fake trucks lack in authenticity, they make up for in smoother logistics.

“It’s much easier when they don’t cook it in there and they just serve from the truck,” said Carol Read, owner of Your Vision Creative and Event Services, a consulting company for meetings and events in central Florida. Generally, a hotel’s catering staff will stage a preparation area behind the truck out of guests’ view, she explained.

“The majority of the people don’t know,” Ms. Read said.

Paula Stratman Rigling, president of Meeting Planning Professionals near Austin, Texas, said that the business groups that worked with her firm enjoyed dining out of food trucks, and that whether the trucks were real or not made no difference.

“They were taking pictures in front of it, taking selfies with the waiter just as if it had been a real food truck,” Ms. Rigling said of an event she held that featured a fake food truck. “People enjoy the atmosphere just as much.”

“For a lot of people who don’t live in places like Washington or New York, it’s cool, it’s different,” she said.

But she added a caveat about booking actual food trucks. “There are a lot of things, to me, that can go wrong,” Ms. Eisenstodt said, including inclement weather and the potential for allergen cross-contamination in a tiny kitchen.

The biggest challenge, though, is long lines. While a line might function as real-time advertising for a street-corner truck, time spent waiting at a conference is time wasted for participants who have a short break to eat, check messages and network.

“I’ve been part of multiple events with food trucks, which is why I really like the faux-food-truck concept,” Ms. Rigling said. “You end up spending your whole lunch hour of a food-truck experience standing in line. It’s not a pleasant experience.”

Ms. Eisenstodt agreed. Being able to speedily feed a crowd is the biggest selling point for going fake, she said. “To me, the worst thing would be that people won’t get enough to eat — and then they’re cranky.”