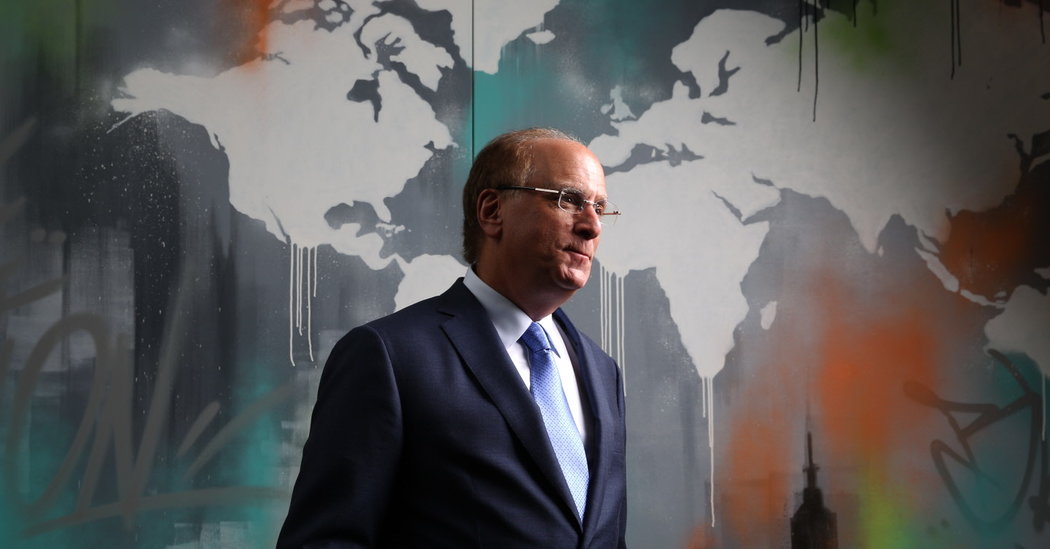 Laurence D. Fink, the founder and chief executive of BlackRock, plans to announce Tuesday that his firm will make investment decisions with environmental sustainability as a core goal.

BlackRock is the largest in its field, with nearly $7 trillion under management, and this move will fundamentally shift its investing policy — and could reshape how corporate America does business and put pressure on other large money managers to follow suit.

Mr. Fink’s annual letter to the chief executives of the world’s largest companies is closely watched, and in the 2020 edition he said BlackRock would begin to exit certain investments that “present a high sustainability-related risk,” such as those in coal producers. His intent is to encourage every company, not just energy firms, to rethink their carbon footprints.

“Awareness is rapidly changing, and I believe we are on the edge of a fundamental reshaping of finance,” Mr. Fink wrote in the letter, which was obtained by The New York Times. “The evidence on climate risk is compelling investors to reassess core assumptions about modern finance.”

The firm, he wrote, would also introduce new funds that shun fossil fuel-oriented stocks, move more aggressively to vote against management teams that are not making progress on sustainability, and press companies to disclose plans “for operating under a scenario where the Paris Agreement’s goal of limiting global warming to less than two degrees is fully realized.”

Mr. Fink has not always been the first to address social issues, but his annual letter — such as his dictum two years ago that companies needed to have a purpose beyond profits — has the influence to change the conversations inside boardrooms around the globe.

And now Mr. Fink is sounding an alarm on a crisis that he believes is the most profound in his 40 years in finance. “Even if only a fraction of the science is right today, this is a much more structural, long-term crisis,” he wrote.

A longtime Democrat, Mr. Fink insisted in an interview that the decision was strictly business. “We are fiduciaries,” he said. “Politics isn’t part of this.”

BlackRock itself has come under criticism from both industry and environmental groups for being behind on pushing these issues. Just last month, a British hedge fund manager, Christopher Hohn, said that it was “appalling” of BlackRock not to require companies to disclose their sustainability efforts, and that the firm’s previous efforts had been “full of greenwash.”

Climate activists staged several protests outside BlackRock’s offices last year, and Mr. Fink himself has received letters from members of Congress urging more action on climate-related investing. According to Ceres and FundVotes, a unit of Morningstar, BlackRock had among the worst voting records on climate issues.

In recent years, many companies and investors have committed to focusing on the environmental impact of business, but none of the largest investors in the country have been willing to make it a central component of their investment strategy.

In that context, Mr. Fink’s move is a watershed — one that could spur a national conversation among financiers and policymakers. However, it’s also possible that some of the most ardent climate activists will see it as falling short.

Even so, the new approach may put pressure on the other large money managers and financial firms in the United States — Vanguard, T. Rowe Price and JPMorgan Chase, among them — to articulate more ambitious strategies around sustainability.

When 631 investors from around the world, representing some $37 trillion in assets, signed a letter last month calling on governments to step up their efforts against climate change, the biggest American firms were conspicuously absent.

BlackRock’s decision may give C.E.O.s license to change their own companies’ strategy and focus more on sustainability, even if doing so cuts into short-term profits. Such a shift could also provide cover for banks and other financial institutions that finance carbon-emitting businesses to change their own policies.

Had Mr. Fink moved a decade ago to pull BlackRock’s funds out of companies that contribute to climate change, his clients would have been well served. In the past 10 years, through Friday, companies in the S&P 500 energy sector had gained just 2 percent in total. In the same period, the broader S&P 500 nearly tripled.

In an interview, Mr. Fink said the decision developed from conversations with “business leaders and how they’re thinking about it, talking to different scientists, reading different research.” Mr. Fink asked BlackRock to research the economic impacts of climate change; it found that they are already appearing in a meaningful way in the form of higher insurance premiums, for fires and floods, and expects cities to have to pay more for their bonds.

Wherever he goes, he said, he is bombarded with climate questions from investors, often to the exclusion of issues that until recently were once considered more important. “Climate change is almost invariably the top issue that clients around the world raise with BlackRock,” he wrote in his letter.

He wrote that he anticipated a major shift, much sooner than many might imagine, in the way money will be allocated.

“This dynamic will accelerate as the next generation takes the helm of government and business,” he wrote. “As trillions of dollars shift to millennials over the next few decades, as they become C.E.O.s and C.I.O.s, as they become the policymakers and heads of state, they will further reshape the world’s approach to sustainability.”

While BlackRock makes its green push, the Trump administration is going in the opposite direction, repealing and weakening laws aimed at protecting the environment and promoting sustainability. Indeed, Mr. Fink’s effort appeared to be another example of the private sector pressing on issues that the White House has abandoned.

Still, Mr. Fink made plain that while he intends for the firm to consider climate risks, he would not pursue an across-the-board sale of energy companies that produce fossil fuels. Because of its shear size, BlackRock will remain one of the world’s largest investors in fossil-fuel companies.

“Despite recent rapid advances in technology, the science does not yet exist to replace many of today’s essential uses of hydrocarbons,” he wrote. “We need to be mindful of the economic, scientific, social and political realities of the energy transition.”

BlackRock manages money for countries across the globe as well as states and municipalities across the nation. It could face opposition for its new stance in areas that benefit from fossil fuels, like countries in the Middle East or states where oil has become a significant part of their economies.

Mr. Fink said that because much of the money BlackRock manages is invested in passive index funds like those that track the S&P 500, the firm was unable to simply sell shares in companies that it felt were not focused on sustainability. But he did say that the firm could do so in what are known as “actively managed funds,” in which BlackRock can choose which stocks are included.

BlackRock also plans to offer new passive funds — including target-date funds that are based on a person’s age and are meant to be used to prepare for retirement — that will not include fossil fuel companies. Investors will be able to choose these instead of more traditional funds. To the extent that fossil fuel companies are in an index, BlackRock plans to push them to consider their eventual transition to renewable energy. Mr. Fink said the company would vote against them if they are not moving fast enough.

“We will be increasingly disposed to vote against management and board directors when companies are not making sufficient progress on sustainability-related disclosures and the business practices and plans underlying them,” he wrote.