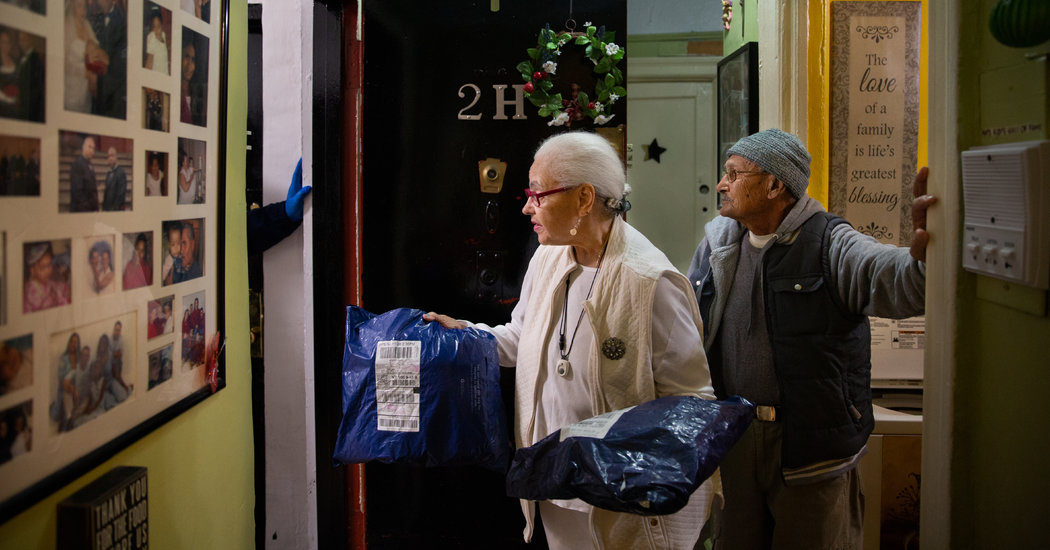 Online deliveries to an apartment building in northern Manhattan are left with a retired woman in 2H who watches over her neighbors’ packages to make sure nothing gets stolen.

Corporate mailrooms in New York and other cities are overwhelmed by employees shipping personal packages to work for safekeeping, leading companies to ban packages and issue warnings that boxes will be intercepted and returned to the senders.

A new start-up company is gambling that online shoppers who are worried about not getting their packages will be willing to pay extra to ship them to a home-based network of package receivers in Brooklyn.

With online shopping surging and another holiday season unfolding, customers’ mounting frustration and anger over stolen packages are driving many to take creative and even extreme measures to keep items out of the hands of thieves.

In New York City, where more orders are delivered than anywhere else in the country, over 90,000 packages a day are stolen or disappear without explanation, up roughly 20 percent from four years ago, according to an analysis conducted for The New York Times.

About 15 percent of all deliveries in urban areas fail to reach customers because of package theft and other less frequent issues, like deliveries to the wrong house, according to transportation experts.

In suburbs and rural areas, thieves often follow delivery trucks and snatch just-delivered packages from homes, often out of sight of neighbors.

Now online shoppers are turning to a variety of strategies to stymie thieves. Some are installing video doorbell cameras or, at the urging of postal workers, replacing outdated mailboxes from a bygone era of postcards and letters with models that can accommodate large packages.

Online retailers and shipping services, recognizing the scope of the problem, are trying to help customers. Amazon has launched a real-time tracking service so shoppers can arrange to be home when a delivery arrives. UPS is working with a technology company to enable drivers to deposit orders for apartment buildings in locked package rooms.

Amazon, UPS and FedEx also offer an expanding network of secure delivery sites for packages when no one is home. Amazon has over 100 “Hub Lockers” in Manhattan alone. Today, a growing number of bodegas, supermarkets, convenience stores, drugstores and florists are acting as makeshift package holding centers.

Package theft has become so rampant in an apartment building in Brooklyn Heights that one resident, Julie Hoffer, says she now avoids shipping anything to her home that cannot fit in a mailbox.

She sends large boxes to a nearby UPS store, or to a relative in Manhattan. “It’s an issue every time I have to order anything,” Ms. Hoffer, said. “Do they offer tracking? Is it too big for a mailbox? Do I have it diverted?”

“I can’t have my medications delivered here or anything that is essential,’’ she said. “I don’t know what the solution is, but I do know that it’s getting worse.”

Around the country, more than 1.7 million packages are stolen or go missing every day — adding up to more than $25 million in lost goods and services, according to an analysis for The Times by José Holguín-Veras, an engineering professor and director of the Rensselaer Polytechnic Institute Center of Excellence for Sustainable Urban Freight Systems.

In a new survey by insuranceQuotes.com, an online insurance service, nearly 1 in 5 respondents nationally reported having had a package stolen.

“The internet economy has brought tremendous efficiencies but it has also created unintended consequences,” Professor Holguín-Veras said. “Human history shows that new technology solves some problems, but in doing so, it creates others.”

Yet the extent of package theft has been largely underestimated because most cases are not reported to the police. Customers have little incentive to do so when online retailers typically refund or replace items for free, often with few questions.

Most police departments do not track package thefts, but those that have examined the problem have reported notable increases.

The Denver Police Department started compiling data on package thefts in 2015, and has seen a 68 percent increase in reported cases, to 708 last year, from 421 four years ago.

In Washington D.C., 1,846 cases of package theft were reported as of mid-November, already exceeding last year’s total of 1,546 cases, according to police records.

In New York, the police do not break out stolen packages into a separate category. Instead, these cases generally fall under grand larceny if an item is valued at more than $1,000, or petit larceny if valued at less.

Even so, package theft has become a concern in some police precincts. The 77th Precinct in Brooklyn recently posted a reminder on Twitter: “Don’t let your purchase become a steal for someone else.”

Package horror stories have become so common that some state lawmakers are taking aim at thieves. In Texas, package thieves could face up to 10 years in prison under a new law. A South Carolina bill, called the Defense Against Porch Pirates Act, would make package theft a felony.

Amazon, the world’s largest e-commerce company, did not respond to repeated questions about how often its packages are stolen, saying only that the “vast majority of deliveries” arrive without an issue.

FedEx and UPS offer delivery options that allow customers to leave instructions where to leave packages and UPS drivers have been trained to leave parcels in inconspicuous locations like behind bushes.

Concerns about package theft have helped push video doorbell camera sales to about 1.2 million cameras nationally this year from less than 100,000 cameras sold in 2014, according to Jack Narcotta, a senior analyst for Strategy Analytics.

“It’s a sense of, ‘I’m going to protect what’s mine — even if I have to get my camera,’” Jason Hargraves, managing editor of insuranceQuotes.com, said of the concerns about package theft.

Still, many New Yorkers have little, if any, package security. Parcels are routinely left outside brownstones and houses in crowded neighborhoods with heavy foot traffic.

In apartment buildings without doormen, residents — and anyone else passing through — can pick through boxes piled in lobbies or hallways in a kind of honor system.

Mercedes Alonte, 26, a wardrobe stylist who gets shipments of clothing for work, had packages disappear last fall from her Brooklyn building, which she has since moved out of. “It made me really on edge,” she said. “I can’t do my job if I can’t trust the packages are going to be there when I get home.”

Shane Reidy, 30, an architectural designer, used to ship packages to his Manhattan office. But he grew tired of carrying his orders — one was a 30-pound exercise bar — home on the subway, so now he takes his chances at his building in Queens.

Some companies that have become inundated with personal packages are telling their employees to find other options. JPMorgan Chase has asked its workers not to have shipments sent to the office, while Warner Media warns that packages will be returned to the sender.

Assuaging the anxiety of online shoppers has provided a new source of income for some businesses.

One mailbox store, the Brooklyn Postal Center, receives about 100 packages a day for residents who pay $5 for each delivery. “People used to come in for mailboxes,” said Suhaib Ali, the owner. “Over time, more and more people were signing up for mailboxes but didn’t actually want them for mail. They just wanted to receive their packages.”

Gabriel Cepeda, 23, came up with the idea for a start-up company built around collecting packages, called Pickups Technologies, after his own Amazon order of computer hard drives was stolen last year outside of his parents’ home in New Jersey. He spent hours on the phone trying to get his order replaced. “It was bad enough to motivate me to brainstorm,” he said.

Now Mr. Cepeda’s company connects online shoppers with a network of about 30 residents in the Brooklyn neighborhood of Williamsburg who will accept packages at their homes at all hours, for fees ranging from $4.99 for a single delivery, to $9.99 for a monthly service. The company plans to expand to more neighborhoods.

In East Harlem, Miriam Cruz, a retired nurse’s aide, is almost always home so a couple of neighbors asked her to keep their packages for safekeeping. Soon, word spread around the building, and over the past five years she has opened her door to thousands of packages.

Nothing has been stolen on her watch — unlike the box of Nike sneakers that disappeared recently from outside another apartment. “Put Nikes in front of anyone’s door, of course they’re going to take it,” she said.

Ms. Cruz, 69, said her family did not want her to do it at first because of worries about strangers showing up at her door. She did it anyway. Now, during the holidays, she has boxes filling her hallway and spilling into her bedroom. If neighbors do not pick them up, she posts reminder notes on their doors.

Ms. Cruz, who is known as “Ma” to her neighbors, refuses to take money so they have thanked her with cake and chocolates.

“This is something I do,’’ she said, “because I love my neighbors and I want to pay it forward.’’